The Marrow Controversy and the Seceder Tradition: Atonement, Saving Faith, and the Gospel Offer in Scotland (1718–1799) 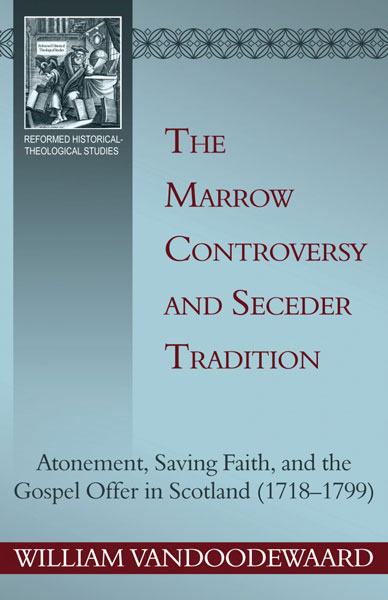 The Marrow Controversy and the Seceder Tradition: Atonement, Saving Faith, and the Gospel Offer in Scotland (1718–1799)

The eighteenth-century Marrow controversy was a significant Scottish Reformed debate. But it was and is much more than that. There are some issues that always seem to need reconsideration and reaffirmation, and the doctrines in dispute in the Marrow controversy are just such doctrines. That is why we are fortunate to have this offering from William VanDoodewaard, associate professor of church history at Puritan Reformed Theological Seminary and a minister in the Associate Reformed Presbyterian Church. This book is not just about the original conflict in Scottish Presbyterianism, but also about its lingering influence in the Seceder tradition (the Associate Presbytery and the Associate Synod) and its ongoing significance today.

The original Marrow controversy arose in the early eighteenth century, when an English theology text by Edward Fisher, The Marrow of Modern Divinity, was republished in Scotland. Condemned by several Scottish General Assemblies, the book and its supporters (known as "the Marrow Men," who included Thomas Boston and James Hog) stressed definite atonement, the inextricable connection between saving faith and assurance of salvation, and the universal offer of the gospel. Each of these doctrines was challenged in the Church of Scotland at the time. The controversy indicated that there was a rift in the church that was not likely to get papered over. And it didn't.

The author's primary contribution to Marrow scholarship is his demonstration of the ongoing significance of Marrow theology in the thinking of ministers in the Seceder tradition. While the "straw that broke the camel's back" was not Marrow theology per se (that straw was the right of congregations to call their own pastors, rather than have the local laird appoint him), VanDoodewaard amply demonstrates that ministers in the Seceder tradition were sympathetic to the Marrow theology. Unfortunately, as is all too common in the life of the church as a whole, this significant commitment to the sound and sane Marrow theology appears to have dissipated over time.

This book reminds us of what we already know. What is affirmed in the first generation tends to be assumed in the second and then can often be denied in the third. In Scotland, there appears to have been a downgrade from Reformational gospel-centeredness to moralism, which eventually slid into liberalism. Scotland, as we know, is not unique in this regard. We must be ever vigilant to guard our life and our doctrine. Dr. VanDoodewaard has reminded us what is at stake.