The Message of the Person of Christ 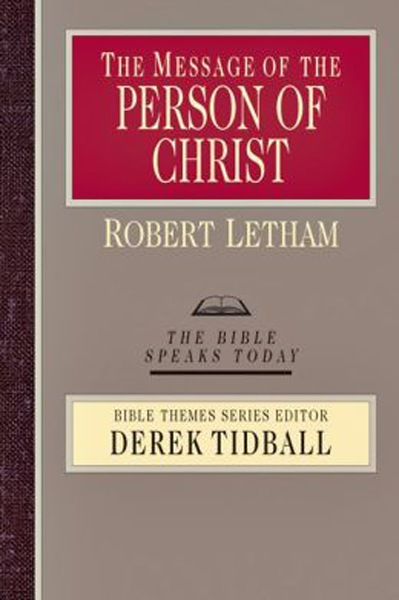 The Message of the Person of Christ

Robert Letham's The Message of the Person of Christ is part of the Bible Speaks Today series from InterVarsity Press. Letham's subject matter is the Christ, not the second person of the Trinity as such. While some may see this as a distinction without a difference, the point is that Letham traces the Bible's teachings on the mediator of redemption, not on the ontology of the second person of the Trinity. He assumes the divinity of Christ and wholeheartedly confesses it, but that is not his focus in this book.

Letham's three-page introduction needs to be slowly read and savored as he sets forth an interpretive method in which belief is the starting point for reading the Bible. Such an approach is refreshing amidst the morass of critical works that seek to undermine the trustworthiness of Scripture and then try to resurrect a kernel of truth from "the abundance of chaff" in Scripture. As Letham persuasively argues:

Sadly, this obtuse refusal to see how the Bible speaks of Christ includes some who are known as evangelical. I have come to sympathize with David Steinmetz's suggestion that, in general and apart from technical matters, medieval and early modern exegesis is superior to that of the post-Enlightenment period. (p. 23)

To employ this methodology, Letham divides the book into five sections: "Christ promised," "Christ incarnate," "Christ crucified," "Christ risen," and "Christ ascended." Letham has several chapters in each section that interpret representative Scripture passages related to the theme of the section. For example, the six chapters of "Christ promised" examine Genesis 3:15; Genesis 12:1–3; 2 Samuel 7 and Psalm 110; Isaiah 7:14–17, 9:6–7, 11:1–5, and Micah 5:2–5; Isaiah 41–50; and Isaiah 52:13–53:12. Each chapter contains a theologically informed exegesis relating the passage to the progress of redemption. He also deals with the critics of each passage's messianic import. An added bonus is that each chapter is short enough to be read in one sitting in a devotional manner.

There is also an appendix in which Letham examines the ecumenical councils from Nicaea (A.D. 325) to Constantinople (553). This brief retelling of the events that surrounded the early councils provides insight into the various misunderstandings that necessitated further refinement and discussion, so that the church would have a better understanding of what the Bible teaches about the Trinity in general and the nature of the Incarnation in particular.

Letham has served the church well by assembling the various texts of Scripture, and by approaching them in faith he has gone a long way toward showing forth the inestimable greatness of our Savior. This book would serve those who are new to the faith as well as the mature in furthering their knowledge of the Redeemer.