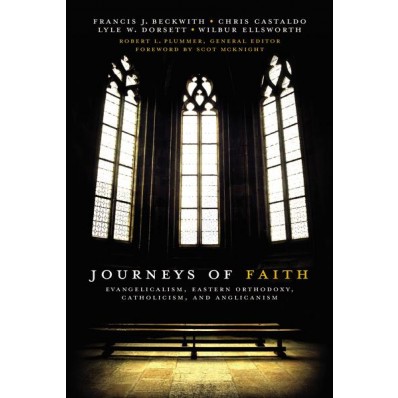 For much of recent church history, evangelical Protestantism was the religious home for people who desired a more biblical and committed expression of Christianity. In recent years, however, especially during the papacy of John Paul II and the debates over sexuality, the traffic between Protestantism and Roman Catholicism has been two-way. In fact, owing partly to the way that evangelicalism became a wing of the Republican Party, some evangelicals searched for ecclesiastical homes where worship and tradition pointed to a faith that transcended election cycles. This book takes the pulse of recent converts who have left evangelicalism for Anglicanism, Roman Catholicism, and Eastern Orthodoxy; it also includes a former Roman Catholic who became evangelical, along with responses from critics. For anyone wanting to understand the appeal of churches outside the evangelical world, this book will be useful. It will also, however, be frustrating to Presbyterians who understand that evangelicalism is not the best representation of Protestantism.

Two matters of major significance emerge from the accounts of those who left evangelicalism for other traditions: worship and history. At least two of the departed found evangelical worship to be particularly weak and the sacraments neglected. For another convert, Roman Catholicism represented a history of Christian reflection that evangelicalism could not match—a history, by the way, according to Francis Beckwith, that even the Reformation could not displace. Without minimizing these concerns, they do not address a more profound question, namely, what does God require?—a query that involves where God has revealed himself and whether human beings are capable of doing what God requires. Of course, God's special revelation (sola Scriptura) and how to be right with God (justification by faith alone) were at the heart of the Reformation.

As it turns out, these are the truths that were crucial to the convert (Chris Castaldo) who became evangelical. He became convinced that Rome's understanding of the church could not be sustained by biblical teaching. "It's not an Infallible Church that God gives us; it's the infallible Word of God" (p. 151). Castaldo also discovered "a nagging fear" that he could not find true forgiveness (p. 160). The Roman Catholic experience is "salvation on probation"—a "feeling that a person is secure in his or her relationship with God so long as one is good in the eyes of the Church" (p. 162).

This book's disappointing aspect is that many professed Christians do not find the questions of revelation and salvation as important as Castaldo does. To be sure, conservative Protestants (whether confessional or evangelical) will not be able to match the beauty or history of other Christian communions. But in the larger scheme of God's dealings with sinners, the glories of liturgy or tradition are trivial compared to the gospel and the book that reveals it.