Life in Jesus: A Memoir of Mary Winslow 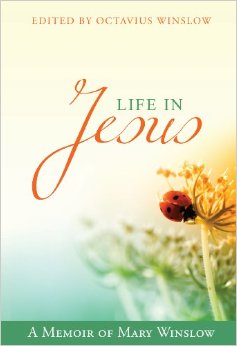 Life in Jesus: A Memoir of Mary Winslow

This book, which recounts the life and letters of a godly woman, makes for edifying devotional reading for anyone interested in the mentoring example of an older sister in Christ. It would make a fine gift for a sister, daughter, or mother in the Lord.

Mary Winslow (1774–1854) was a woman with a "peculiar talent," according to her son, Octavius—a gift for "counseling, succouring, and sympathizing with the perplexed, the feeble, and the tired of His family." She saw this herself: "If the Lord has ever honoured me in any way by making use of me, it has been in comforting the comfortless, or in speaking a word to the tired and heavy-laden." The many letters and diary entries written and preserved by Mary herself, and collated by her son, exemplify this. These constitute a large portion of this 550-page volume. They reveal an earnest Christian woman whose chief desire in life was to glorify the Lord Jesus in all circumstances.

Was a friend sick? Mary wrote, "How sorry I was to hear you continue so tired in body. Surely the Lord loves you too well to lay the weight of a feather upon you, were it not for some wise and loving purpose He has in view in preparing you for the full enjoyment of the glory He has gone to prepare for you." Was an acquaintance bereaved of spouse or child or infant? Mary wrote, "I pray that you may be sustained and comforted of God. Jesus is very near. He is ordering all things for you. He does not willingly afflict us. It is to wean us from a dying world and from ourselves."

Scripture was so familiar to Mary that it flowed naturally in her prose. Her tenderness and candor, interwoven with biblical truth, is lovely to behold. Her letters can be instructive to Christian women today as we encourage each other in the difficult circumstances God brings to each of us.

Mary's life was checkered with many challenging providences. For example, when she preceded her husband in moving from England to America with their ten children, her young daughter died. On the day of her daughter's burial, she received word that her husband had died. A widow with nine sons to raise in a new country, Mary understood by experience the pain of bereavement and the spiritual battle that accompanies such a loss. She sank into a valley of depression and wrote honestly about the experience—especially about God's faithful deliverance in due course through the ministry of his people. Later in her life she wrote, "A thousand times have I thanked the Lord for all my trials and afflictions. I would not have been without them for worlds. They have been messengers of boundless love and mercy to me and mine."

In addition to Mary's diary entries and letters, Octavius inserts his own edifying commentary on theological issues as they arise in the context of the memoir.