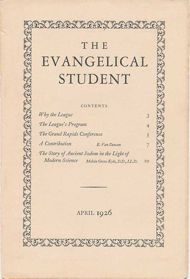 On Saturday evening, November 30, 1935, J. Gresham Machen spoke at a banquet of the regional conference of the League of Evangelical Students in Philadelphia. Commenting later on the experience in the pages of the Presbyterian Guardian, he wrote, “one always gets the impression at these meetings that being a Christian is a joyous thing, and that this fine company of young men and young women is not a bit dismayed by all the opposition of the world.”

Machen went on to commend the work of the League: “it is doing a work which is entirely unique. No other consistently Christian organization of national scope is even attempting to enter the field in which the League has been laboring during the last ten years. That field is one of the most needy fields for Christian service to be found anywhere today. It is the field of the student world of America.”

Organized in 1925, the League of Evangelical Students was an early 20th century forerunner to evangelical campus ministries such as InterVarsity Christian Fellowship. Its mission statement declared it to be "an inter-denominational and international student movement for the defense and propagation of the Gospel in the modern student-world." Its leadership came largely from conservatives in the Presbyterian Church and many of its leaders would play prominent roles in the formation of both Westminster Theological Seminary in 1929 and the Orthodox Presbyterian Church in 1936.